The Knox County Lady Eagles placed 2nd in the 2018 Schuyler R-1 Softball Tournament. The tournament was held at Lancaster Ballpark on Sept. 29. For their first game, they played the Brookfield Lady Bulldogs, winning 4-1. Next, they beat the Highland Lady Cougars 3-2. This tournament was very different from the rest of the games this season due to the cold weather. Senior, Savannah Mauck said, “I think we play better in the cold.”

The championship game was played at Knox County High School on Tuesday, Oct. 2 due to weather pushing the game back. This game doubled as the tournament championship and a conference game. The Lady Eagles lost to the Marceline Lady Tigers 1-3. Sidney Miller hit a solo home run in the bottom of the sixth inning, but the Lady Tigers scored their three runs in the top of the seventh. The Lady Eagles went 2-1 in the tournament making them 14-4 on the season.

The Knox County Middle School football season is coming to a end. With one game left in their season, their current record is 1-3. The biggest struggle for the middle school team this year has been numbers. Head coach, Nathan Miller commented, “We’ve had a lot of injuries and different things that have taken our players away from being able to play in the games.” Starting the season with only about 16 players, Miller said that from the beginning they have struggled with losing players to injury. This has made it very difficult for the team, especially when facing other teams with anywhere in between 20 to 25 kids.
To prepare for each game, Miller mentioned that they have offensive days, defensive days and days to review other schools and make adjustments. Each day is dedicated to one aspect that they work on the entire time.
The next and final game of the middle school season is against Scotland County. The game will be on Thursday, Oct. 11. Miller stated, “Knox County against Scotland is always a good game; there’s always good rivalry there, whether it is fifth and sixth grade all the way up to high school.” Miller also mentioned that he thinks that Knox has a good chance of beating them but it will be tough all the way throughout. 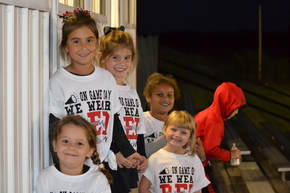 “I think that the kids had a lot of fun and it was a way for them to express themselves and meet other kids that share the same interests,” said Murr. 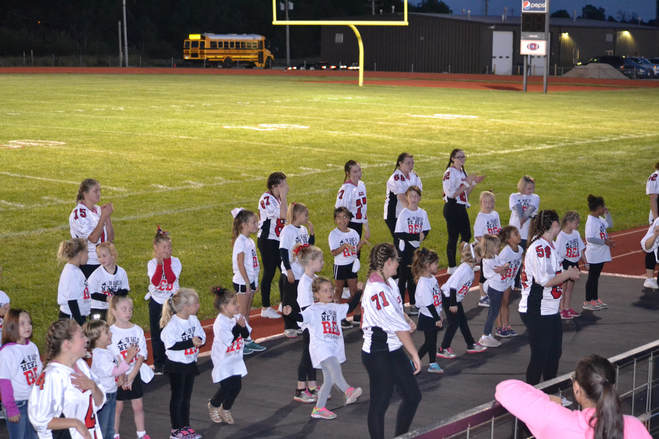 Eagles Get Excited for Homecoming Game
By: Nash Miller

On Thursday evening, Sept. 27, the Knox County Cheerleaders hosted a pep rally to help get the fans and players pumped up for their upcoming homecoming game Friday night. The night started with a routine from the Varsity Cheer Squad, followed by the announcement of  of all of the cheerleaders and captains. Next, the Varsity Football players, managers and coaches were introduced. Then, Knox County Little Feathers performed a few routines along with the Varsity Cheerleaders.

The Knox County Marching Band and Flag Girls then entered onto the field to a perform the Knox County R-1 school song. Following the band, the High School Student Council Members were introduced, along with the Homecoming Royalty Candidates and Court. The 5th and 6th Grade cheer squad then performed their cheer routine. Last, but not least, the  Knox County Lady Eagles Softball players and coaches were introduced.

Following the pep rally, FBLA hosted a high school powderpuff game. The teams were Senior girls versus the Junior, Sophomore and Freshmen girls. Both teams were coached by a handful of the Varsity Football players. After two 10 minute halves, the senior girls emerged victorious, winning 6-0.


​
Trap Shooters Travel to Area Meet
By: Cadie Violette
​
The Knox County Trap Shoot team attended their area meet on Tuesday, Sept. 25. Zane Hubble, Mathew Hunolt, Jacob Cheatum, Jared Peavler, Cole Conn, Landon Hubble, Nick Hamlin, Brayden Miller, Zyan Triplett and Carter Marble were the top 10 shooters that competed. After area, comes districts. To move on to districts, the team has to be in the top 7 out of all the other teams.

Coach Rebecca Mallett says, ”Our season was lovely. We attended four meets. We won at West Quincy and placed fourth at Macon out of 60 or more teams.”  Mallett was most concerned about the number of trap shooters on the team; this was their biggest year yet with 23 on their team. Having 23 on the team made it hard to have practices and get all the shooters in.

Senior, Zane Hubble said, ”My favorite thing about trapshooting is it is fun-being able to go to a trap shoot and have a friendly competition with each other to see who can shoot the best.” Hubble has been a trapshooter his entire high school career.

​The trap team did not make it past area, but they were only 2 points away from going on. Hubble says that one of his biggest challenges as a senior trapshooter was keeping the freshman and new shooters in line, while playing the part as a role model for them. ”I have enjoyed trap shooting and I feel like it is something that everyone should try at least once growing up. I feel like it is a good camaraderie for everyone to be able to come together and just have a blast,” Hubble stated.

The Lady Eagles played at home against the 13-1 Salisbury Lady Panthers on Monday, Sept. 24. Going into this game, the Eagles were 9-2 in their season so far. “It hurt us because we didn’t have practice the day before. We knew it was a big game and maybe we put a too much pressure on ourselves,” head coach Zach Short said. Short also noted that the Eagles came into the game hard but caught up in a couples of jams. They struggled through it a little bit, but held their heads high and did not lose their confidence. The Lady Eagles fought hard through that game but the odds were not in their favor. Senior, Mckayla Griffith said, “We came out ready to play but it wasn’t our game.” The Lady Panthers came out on top with an 8-0 win against our Lady Eagles, turning our season record to 9-3.

On Thursday, Sept. 27, the Knox County Lady Eagles played at home against the Harrisburg Lady Bulldogs. Short said, “I was so looking forward to Harrisburg on Thursday.” The Eagles prepared for the Bulldogs by focusing on their mental game and hitting practice. The Lady Eagles started the game off by getting 5 runs in the first inning. Senior, Katie Hamlin and sophomore, Riley Strange each hit a two-run homerun in the same inning. Short said, “Offensively, I was very proud. We worked on it last week a little and they came out and hit the ball really well.” The Lady Eagles ended the week with a massive 15-0 win over the Lady Bulldogs, making their season record 10-3.

With a Big Win Over Paris, Eagles Advance to 2-2 on the Season

Photos by: Bryston Bowen for Yearbook
Powered by