For the 2017-18 basketball season the Knox County Eagles and Lady Eagles had a very good season that sadly ended soon in districts, but many of the talented players got named all-conference. For the Lewis and Clark All-Conference 1st team we had Hayden Miller and Sidney Miller. Third team all-conference was Nickolas Edwards and Jessica Anderson. The teams and coaches are very proud of all the athletes that received this award and look forward to the same outcome next year.


Basketball districts started the week of February 19 and the Lady Eagles played Clopton. The Lady Eagles were the 6th seed and Clopton was the 3rd seed. The Lady Eagles lost 45 to 35 and their season came to an end. Knox County senior Jessie Anderson did not play in the game due to an ankle injury. Jessica Anderson said not playing in the last game was hard to watch but she still believed in her team. She also said that the team proved what they are capable of in the upcoming years.

Basketball districts this year were held in Canton, MO. The Knox County Eagles started districts off on Wednesday the 21st. They were originally supposed to play the following day the 20th but because of weather it was held off till the next day. The boys first match up was against rivals Scotland County Tigers. It was a back and forth game till the fourth quarter, the boys started breaking away and ended up winning 54-41 advancing them in districts. The boys next match-up would be Friday the 23rd against the Canton Tigers. After a slow start the boys starting fighting back making it an interesting game. Unfortunately, the boys weren’t able to come away with a win, falling to Canton 54-33. This marked the end of the 2017-18 season for the boys. Leaving are three seniors Hayden Miller, Cory Moubry, and Nickolas Edwards.

​
Knox County R-1 Campus Bowl has had a very busy season so far this year. Campus Bowl is where teams compete against each other answering trivia-type questions from random categories. Varsity members include Shelby York, Amber Morgret, Natalie Clark, Landon Hodge, Brandi Carlyle, Nash Miller, and Wesley Ward. So far this season, the team has competed in 2 tournaments and 3 games.  The team carries 10 wins and 12 losses. Despite their losses slightly outweighing their wins, the team has 8 games and 3 tournaments left. Campus Bowl teaches important life skills such as time management. Campus Bowl builds character by showing participants the value of teamwork and improving their academic knowledge. Part of Campus Bowl’s success is contributed to the Advisor, Amy McNabb. McNabb has been the Advisor of Campus Bowl for 5 years. Aside from being the Campus Bowl Advisor, McNabb is also a high school math teacher at Knox County R-1. Her favorite part of advising Campus Bowl is going to games with the team and seeing them answer math-related questions correctly. ​ 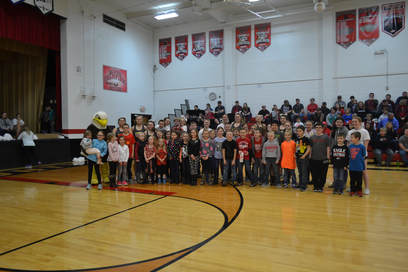 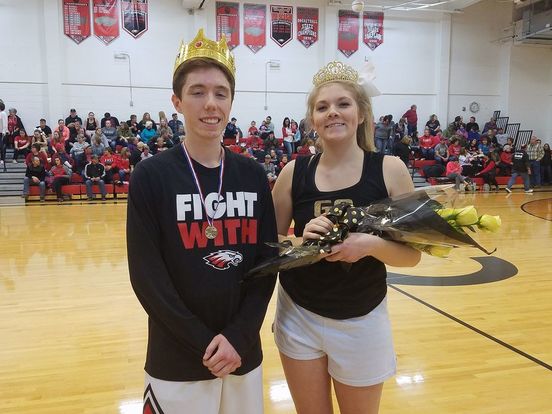 The second senior candidates are Michael Carlson and Lindsey Alexander. Carlson is the son of Randy and Kelly Carlson. Carlson is involved in football, Student Council, National Honor Society, FBLA, track, Spanish club, FCA, and is the senior class President. Alexander is the daughter of Stacy and Lora Alexander. Alexander is involved in cheerleading, Drama club, serves as the Spanish club president, and is also the NHS Vice-President.

The third senior candidates are Nickolas Edwards and Jessie Anderson. Edwards is the son of Richard and Maggie Edwards. Edwards is involved in football, basketball, baseball, NHS, FBLA, Student Council, Spanish club, FCA, and is the Senior class treasurer. Anderson is the daughter of Michael and Roberta Penn. Anderson is involved in basketball, softball, track, FFA, FBLA, and FCA.

The Junior court members are Wes Ward and Savannah Mauck. Ward is the son of Robert and Maranda Ward. Ward is involved in Campus Bowl, football, Student Council, track, Drama club, and is the student section captain. Mauck is the daughter of Robbie and Sherri Mauck. Mauck is involved in softball, basketball, and FBLA.

Courtwarming King and Queen will be crowned on February 16th in between the varsity basketball games.

Little Feathers has been around a long time here at Knox County. Senior, Lexey Watts said, “I loved cheering and teaching the elementary students everything about cheerleading.” Elementary students participated in a cheer clinic last Saturday, where they learned the cheers and the halftime routine.

On Friday Oct. 6, 2017 seniors involved in football, cheerleading, and band were honored before the football game against Highland. The Eagles flew by the Cougars with a 40-22 victory.

Aden Triplett is the son Daryn Triplett, Jennifer Brummit, and Josh Brummit. Triplett is involved in football, 4-H, band, FFA, trapshooting, game club, and german club. After high school, Triplett plans to attend college and study animal science. Then he plans to either farm or work at a machine shop.

Amber Morgret is the daughter of the Allan and Janee Morgret. Morgret is involved in  Campus Bowl, is the football manager, FFA president, FBLA vice-president, NHS secretary and treasurer, and the Spanish Club secretary. Morgret’s future plans are to attend college to study Agriculture business.

Lindsey Alexander is the daughter of Stacy and Lora Alexander. Alexander is involved in cheerleading, NHS, Spanish Club, and Drama Club. Alexander’s future plans are to attend UMKC to become a nurse anesthetist.

Michael Carlson is the son of Randy and Kelly Carlson. Carlson is involved in track, football, Student Council president, NHS president, and the FBLA president. Carlson’s future plans are to attend Southeast Missouri State University to study cyber security and enroll in the Air Force ROTC.

Lexey Watts is the daughter of John and Amy Watts. Watts is involved in FFA, Cheerleading, and Drama Club. Watts’ future plans are to attend college and become a teacher.

Xavier Williams is the son of Anne Bock. Williams is involved in football, and Drama Club. Williams’ future plans are to attend college.

Will Rice is the son of Clayton and Melissa Rice. Rice is involved in football. Rice’s future plans are to attend Truman State University and major in political sciences.

Samuel Kerby is the son of Brett and Wendy Kerby. Kerby is involved in football and FCA. Kerby’s future plans are join the Navy ROTC program at Mizzou or become an EMT.

Jordan McKay is the daughter of Ben McKay and Debbie Mathews. McKay is involved in FBLA, German Club, and Drama Club. She is also the Varsity cheer squad captain. McKay’s future plans are to attend Culver Stockton’s Blessing Rieman Program and receive her bachelor degree in nursing.

Tommy Hayes is the son of Chuck Hayes and Shelby Westhoff. Hayes’ is involved in band, FFA, and Drama Club. Hayes’ future plans are indecisive.

Nickolas Edwards is the son of Richard and Maggie Edwards. Edwards is involved in football, basketball, baseball, FBLA, NHS, Student Council, and 4-H. Edwards’ future plans are to attend college and become a coach.

Ace Hubbard is the son of Larry and Kami Hubbard. Hubbard is involved in football. Hubbard’s future plans are to work in construction.

Hayden Miller is the son of Craig and Amy Miller. Miller is involved in football, basketball, baseball, track and field, A+, FCA, FBLA, Spanish Club and holds offices in the following clubs, NHS reporter, Student Council reporter, and is the class secretary. Miller’s future plans are to attend college and major in nuclear engineering.

Cory Moubry is the son of Shelly Moubry and Angela and Chris Moubry. Moubry is involved in football, baseball, track, basketball, FBLA, Spanish Club, and FCA. Moubry’s future plans are to attend college to play football.

Olexes Strange is the daughter of Bobby and Kelly Strange and Douglas and Deanna Glasglow. Strange is involved in basketball, cheerleading, Drama Club, 4-H, and German Club. Strange’s future plans are to attend college and study criminal justice.

Head Coach, Bruce Vannoy said that the seniors have been a very big aspect to the football team these last four years. Most of them have been four year starters so they have contributed a lot of success to the program. They have been a good group of leaders by leading by example. Coach Vannoy says he will miss these seniors because he has watched them play since 5th-6th grade football.

Four year starter, Cory Moubry says that he is excited to be a senior. He just isn’t ready for his high school football season to be over. What Moubry wants to take from high school is his friends and remembering all the fun times he had.

Senior football player, Nickolas Edwards says that he is also pretty excited to be a senior. He says, "You always think it will never be you, but now I am a senior and it feels pretty cool." What Edwards wants to take with him from high school is his relationship with his teachers, classmates, and teammates. He says everyone has taught him so much that he will be able to use in the future.

Knox Holds On for a Homecoming Win
By: Aden Triplet

Homecoming 2017 is in the books for the Eagle.  On Friday, September 15, "Friday Night Lights" shined down on the
Knox County Eagles vs. the Harrisburg Bulldogs. The final score of 32-18, with Knox on top, brought the Eagles their 3rd conference win.

Going into the game, Coach Vannoy aimed to maintain a normal schedule and routine for his players between all of the
homecoming festivities. Coach Vannoy was relying heavily on his line and the leadership of some outstanding juniors and seniors to do this.

The cheerleaders and community at Knox County kept the spirit high throughout the crowd during Friday's game. This added excitement helped feed into the intensity of the game.

Though the Eagles had a few set backs during the game they pushed through to claim another victory.
Middle School Sports Recap
By: Emily Nichols

On Thursday, Sept. 14 the Lady Eagles played the Westran Tigers at home. The Eagles won 10 to 0 in five innings. Thursday was senior night for the Lady Eagles and three seniors were honored. Those seniors included Jessica Anderson, Reagan Winter, and Emily Nichols.

Coach Becky Barnhill said, "They mean a lot to this team. Reagan has been our catcher for the last four years. Jessie and Emily have both done whatever I have asked them to do. They are the leaders this year."

Anderson said her favorite memory over the last four years was when she fell over the fence trying to catch a fly ball. Her goal for the year is to win districts and go to state.

Nichols said her favorite memory was getting the game winning hit against Marceline for the conference championship and her goal is to get signed for softball and to make it to state.

Winter’s favorite memory was winning districts and sectionals. Her goal for this year is to make it to state.